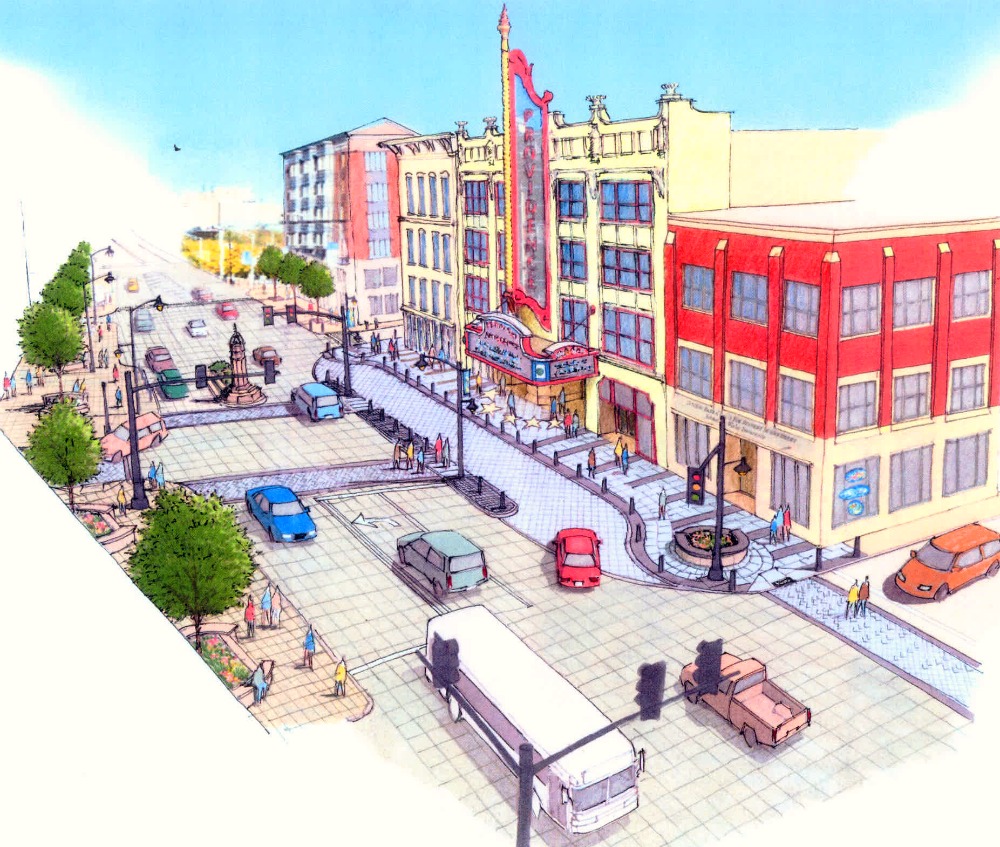 Today the Mayor’s Office held a press conference announcing the designation of the intersection of Weybosset and Mathewson Streets as “PPAC Square.” This is part of the larger Downtown Circulator Project.

Speakers included the Mayor, Director of Planning and Development Thom Deller, Joe Walsh the Chairman of the PPAC Board, and Laurie White of the Greater Providence Chamber of Commerce. 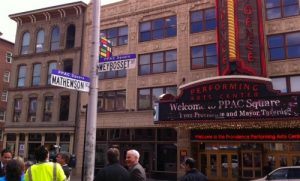 Deller noted that the Circulator Project first started as an analysis of converting traffic to two-way flow back in 1997 after being recommended by Andres Duany’s charrette. As mentioned in our previous post, Phase I was Washington Street, Phase II is Weybosset and Empire, and the city hopes to breakground on Phase III, LaSalle and Emmett Squares and adjacent roadways later this year.

Walsh thanked then Senator, now Governor Chafee for securing a $750k grant to make the project possible, PPAC made a 20% contribution to that grant.

When the station was closed, in the mid-70’s the section immediately behind the tower was built to cover the stairs. Later, in the early 90’s the back structure, which until recently had been a police substation, was built. Those modern additions will be removed. 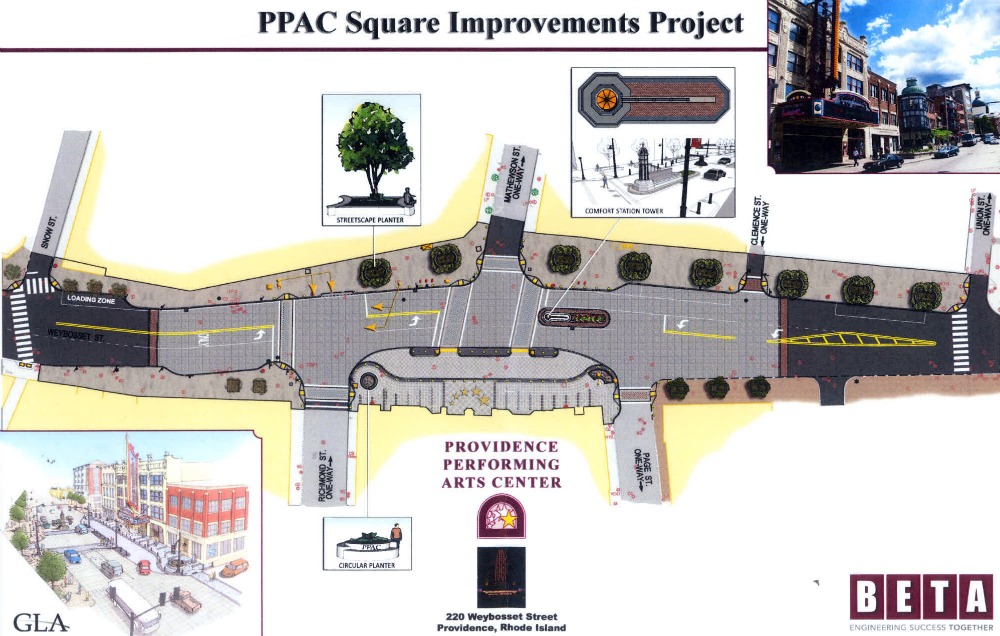 Also announced at the press conference were streetscape improvements, including trees and decorative lighting, for Westminster Street on the West Side and Olneyville Square.

Further details on all the projects in this Press Release from the Mayor’s Office:

PROVIDENCE, RI – Mayor Angel Taveras held a press conference and celebration today to rename the intersection of Weybosset Street and Mathewson Street in the heart of Downtown Providence’s Arts & Entertainment District as PPAC Square, in honor of the Providence Performing Arts Center’s contributions to the City.

“I am very pleased to honor the Providence Performing Arts Center for its great contributions to our city’s cultural life. PPAC Square is the centerpiece of a major construction project that will improve Providence’s Arts & Entertainment District, enhance the streetscape and create two-way traffic on Weybosset and Empire Streets,” Mayor Taveras said. “Providence is the economic and cultural hub for our state, and it’s vitally important that we make visiting, working and living in Providence even better.”

Together, the construction projects will repave roadways and sidewalks, upgrade traffic signals and signs, and install ornamental lights, trees, planters, a bike lane, bike racks and other public amenities throughout the city.

The Downtown Providence Traffic Circulation Improvements Phase II project began on April 7 and is scheduled to continue through the end of the year. The $5.5 million project will restore two-way traffic on Weybosset Street and Empire Street for the first time since the 1970s, and significantly reconfigure and enhance the area of Weybosset Street in front of the Providence Performing Art Center.

In PPAC Square, a dedicated drop-off lane will be installed in front of the landmark arts venue, and the historic tower of the comfort station will be restored and relocated to a new median island in the center of Weybosset Street. Streets and sidewalks in the square will be replaced, and 25 new trees, granite planters, bike racks, ornamental bollards, new benches, and ornamental streetlights installed.

“PPAC was pleased to collaborate with the City of Providence to bring this significant project to fruition. The enhancements to PPAC Square will improve the theater experience for our patrons and benefit the entire Providence Arts & Entertainment District,” said Joseph W. Walsh, Esq., chairman of the PPAC Board of Trustees.

The $5.5 million project includes $4.7 million in federal aid, including $700,000 in matching funds from the state and a $937,500 appropriation secured by PPAC for improvements at the intersection of Mathewson and Weybosset Streets. An additional $800,000 was procured via a Providence Public Building Authority bond.

Phase I of the Downtown Providence Traffic Circulation Improvements project, which involved reconfiguring traffic on Washington Street to two-way, was completed in 2004. Phase II was stalled for several years by funding procurement and design delays.

“We applaud the city’s commitment to making these improvements and for fostering collaboration among many to provide improved access to the high quality arts and cultural activities Providence has for resident and visitors,” said Laurie White, president of the Greater Providence Chamber of Commerce. “It’s through continued collaboration that we have enhanced the heritage of our Capital City while positioning Downtown Providence as a competitive arts, business and residential center of the region.”

In the West End and Olneyville, the Streetscape Enhancements to Westminster Street and Olneyville Square project will continue through December. Work will restart in spring 2012 for completion in late July 2012.

Traffic signal replacement and coordination in Olneyville Square and at the intersection of Westminster and Barton Streets is expected to alleviate traffic congestion in those areas.

In the city’s third major construction project, the Broadway Road and Traffic Signal Improvements project will upgrade and coordinate the traffic signals on Broadway and add a striped bike lane in each direction on Broadway, repave Broadway and the intersection of Pocasset Avenue and Plainfield Street, and replace existing sidewalks in poor condition on Broadway.

The $1.8 million project, which is being paid for with federal highway funds, is scheduled to be completed in the fall of 2011.