“Cities that make a commitment to walkable and bikeable living are healthier cities, with a more dynamic and engaged quality of life,” said Mayor Taveras. “The Bicycle and Pedestrian Advisory Commission will move Providence forward in our efforts to make biking and walking more regular modes of transportation for more of our neighbors.”

The Department of Planning and Development will provide administrative support to the Commission.

Mayor Taveras announced creation of the Commission after he and bicycling advocates from his staff rode their bikes this morning from the Mayor’s home to a Bike To Work Day celebration at the World War II Monument at Providence’s Memorial Park.

Hundreds of bicycle commuters and advocates from across the city participated in the Rhode Island Bicycle Coalition’s annual Bike To Work Day event, which featured a bike mechanic on site courtesy of REI, a commuter breakfast and coffee service courtesy of New Harvest Coffee Roasters and Whole Foods Market, a rack and ride demonstration by the Rhode Island Public Transit Authority (RIPTA), a photo booth courtesy of ZipCar, and booths from Dynamic Bicycles, Cleverhood, Legend Bicycle, Caster’s Bicycles and more. 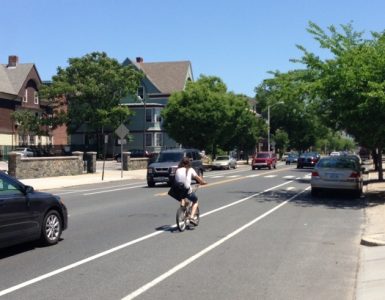 With spring in the air, the City of Providence and the RI Bicycle Coalition invite you to celebrate Bike to Work Day on Friday, May 16th as part of National Bike Month.