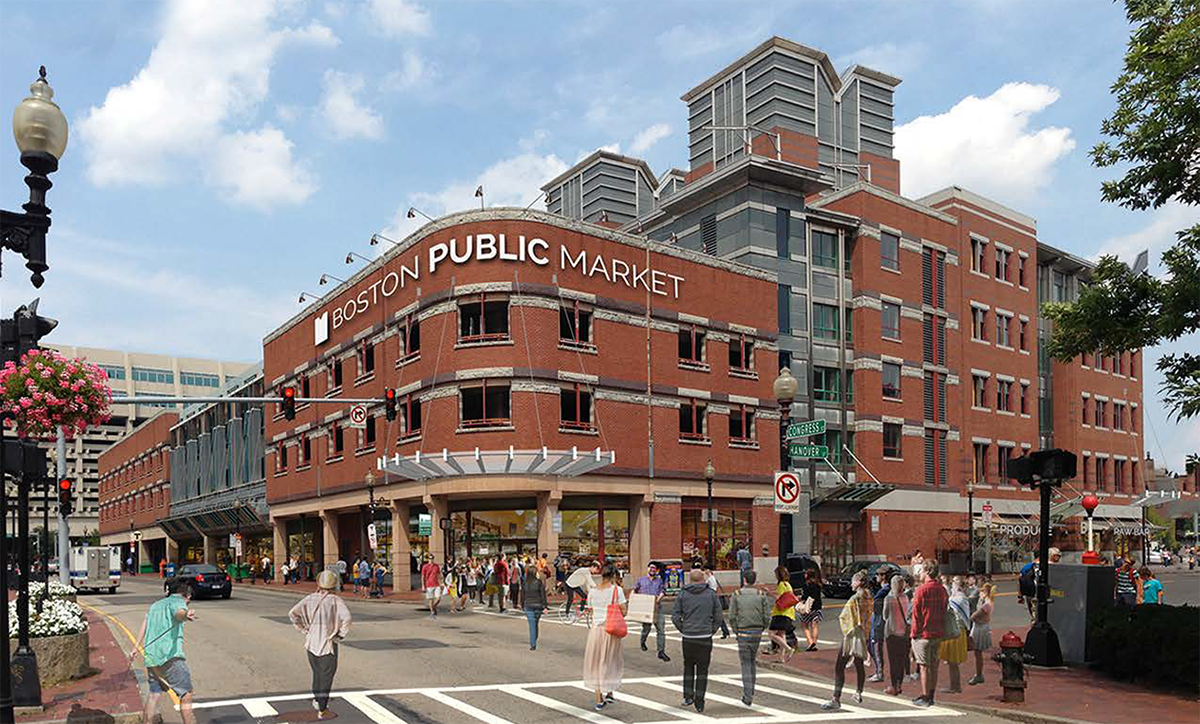 Rendering of the Boston Public Market

Project for Public Spaces: Boston’s Public Market To Be a Hub for Local Food

PPS’ public markets team has just returned from Boston and is excited to announce that it has begun creating an implementation plan for the first floor of Parcel 7, a MassDOT-owned building that is slated to house a public market. Both local residents and vendors are energized by the decision to re-purpose Parcel 7 into a marketplace that will promote regional food, support the New England economy and foster social integration.

[box style=”info”]More on Boston’s new public market, set to open in 2015 at their website.[/alert]

The American Conservative: What to Do With Waterfronts?

Many city waterfronts used to be seedy industrial spaces: Dickensian areas once characterized by water trade and commerce, marked occasionally by squalor or disrepute. But as cities have changed, grown, and gentrified, our waterfronts are changing too.

Nonetheless: changes, even good changes, have consequences. Waterfront projects—be they in wealthy, well-kept communities or in run-down spaces—need a sense of scale and structure in order to foster beneficial growth.

When I wrote about Alexandria’s waterfront project, New Urbanists Peter Katz and Philip Bess both offered a wealth of ideas and tips for excellent, human-scale waterfront development. There were a lot of things we discussed that I simply didn’t have room for in my story—so here are a few “bonus” comments from the two men. They explained five specific ways to help make a waterfront a good New Urbanist space:

I think the best piece of advise in this list is the building it for locals, not tourists. Tourists like local things, but locals do not always like tourist things.

The Walking Bostonian: If you need a flashing sign then you failed at street design

By designing and building such high-speed roadways, it’s almost as if the city is encouraging drivers to break the speed limit. The situation would be ludicrous if it weren’t so deadly serious. If Boston officials truly want safer streets, and I believe that they do, then it’s time to reduce design speeds on all upcoming and future street plans. And for Beacon Street, it’s long past time to re-stripe smaller and fewer lanes. That street may not be up for reconstruction for a while, but that’s no excuse not to do some planter and paint-based interventions in the meantime.

The Boston Globe: Why Mass. should defect from its time zone

They’ve found one time that works for them all year round. Here in New England, we have that option, too. It’s an alternative to the Eastern Time Zone called Atlantic Standard Time or AST. Used in eastern Canada, the Caribbean, and much of South America, it matches the time we already use in the summer, and would simply mean that in the fall, we don’t have to fall back.

The idea of defecting from our time zone might seem strange. Yet the emerging science and the geographic reality of life in New England make it an idea worth serious consideration.

America’s suburban experiment is a radical, government-led re-engineering of society, one that artificially inverted millennia of accumulated wisdom and practice in building human habitats. We can excuse modern Americans for not immediately grasping the revolutionary ways in which we restructured this continent over the past three generations–at this point, the auto-dominated pattern of development is all most Americans have ever experienced–but today we live in a country where our neighborhoods are shaped, and distorted, by centralized government policy.

Kotkin begins his piece with a reference to Franklin Roosevelt. In the depths of the Great Depression, Roosevelt pushed for the creation of the Federal Housing Administration (FHA). The traditional way of building a home–in slow increments over time, sometimes with an attached commercial enterprise that helped with cash flow–became impossible to underwrite as government officials, desperate for economic growth, used regulation to make the single family home the only viable option for new homeowners. The federally-established Fannie Mae and Freddie Mac followed. The results were rising home ownership and economic growth, but on a very different framework, one where families held significantly higher levels of long term debt.

The Washington Post | Wonkblog: The many reasons millennials are shunning cars

There’s a lot of evidence that millennials don’t drive as much — or care as much for cars in general — as previous generations their own age did. They’re less likely to get driver’s licenses. They tend to take fewer car trips, and when they do, those trips are shorter. They’re also more likely than older generations to get around by alternative means: by foot, by bike, or by transit.

There’s still a lot of dispute, however, over exactly what these trends mean. Are millennial driving habits a byproduct of the weak economy? (If you have no job to go to, chances are you drive less.) Or do they signal deep and permanent shifts in the American relationship to automobiles? If the latter is true, these nascent millennial indicators could have major implications not just for car dealers and gas stations, but for how the U.S. invests in transportation.

[Boston] Public food market gets $10m promise [Boston.com] The Boston Public Market will be located along the Greenway in a building close to the location of the current Haymarket. The market is expected to be open in...