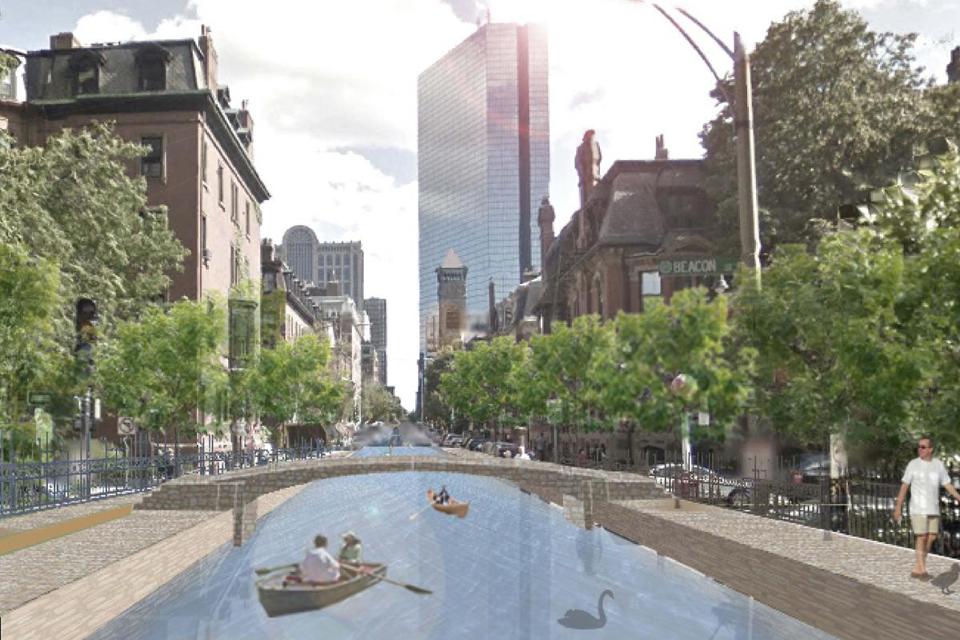 One proposal to combat sea-level rise in Boston, convert Clarendon Street into a canal.

BostInno: 6 Visuals for How Boston Can Adapt to Rising Sea Levels

Though Boston has historically grown outwards into the ocean, with landfill expanding its boundaries over the decades, the threat of it being submerged back into the Atlantic is very real. Though the Commonwealth of Massachusetts has introduced numerous legislation in an attempt to curtail rising sea levels, as has the City of Boston, there needs to be a shift in thinking from how we can combat the effects of climate change to how we can adapt to them.

A new report published by the Urban Land Institute’s Boston/NewEngland branch makes a number of municipal design suggestions and reaffirms on several occasions that the time to act is now.

The study, called The Implications of Living With Water, examines four specified areas dangerously at-risk should Mother Nature decide to unleash her wrath in the form of a hurricane not unlike Sandy, which devastated the Eastern seaboard from New York City down to Florida.

BostInno: It’s Official: Allston Is Going to Get a New MBTA Station

Tuesday afternoon Governor Deval Patrick announced that previously derailed plans for West Station are back on. When West Station is complete, commuters will be able to make direct trips back and forth between Allston and Back Bay or South Station – without having to suffer the misery of the Green Line.

The MBTA has long range plans to do short run subway-like service on some of it’s commuter rail lines within areas in and close to Boston using smaller DMU trains.

If/when the MBTA moves ahead with plans for purchasing DMU’s, Rhode Island should be ready to get on board with them (sorry). DMU’s would be perfect for running higher frequency intra-state service in Rhode Island.

The “9 x 18” proposal capitalizes on an outdated and onerous zoning mandate that requires private developers to build parking spaces for new apartments in certain parts of the city.

The regulation clashes with Vision Zero, the mayor’s new pedestrian safety initiative. It’s also bad for traffic and the environment. And it forces developers to spend what a study by the Furman Center at New York University estimates is up to $50,000 per parking space, money inevitably charged to consumers, increasing housing costs. The mandate should be abolished, but dropping it would clearly force city officials to collide with car-owning voters, especially those poorly served by mass transit.

Instead, the “9 x 18” plan turns the zoning requirement into a kind of commodity.

David Dadekian has an idea that he believes would boost Rhode Island’s economy, increase the overall health of the population and reduce the state’s carbon footprint. The founder of Eat Drink RI and the 2014 Rhode Island Foundation Innovation Fellowship recipient wants to create a year-round marketplace in Providence that is equivalent to Pike Place Market in Seattle or Reading Terminal Market in Philadelphia.

“My plan is to create a centralized culinary hub for Rhode Island, a complete business-to-business and business-to-consumer center, as well as being a destination for visitors to Rhode Island,” Dadekian said. “This culinary hub would be integral to the way Rhode Islanders eat, and create a model for wider emulation in other regions of the country.”

I’ve long thought the parking lot at Union Station outside RiRa would be a great place for a public market. Another tunnel under Memorial Blvd. could connect it to Waterplace and it would be an attraction to bridge the gap between the mall and Downcity, centrally located to transit as well.