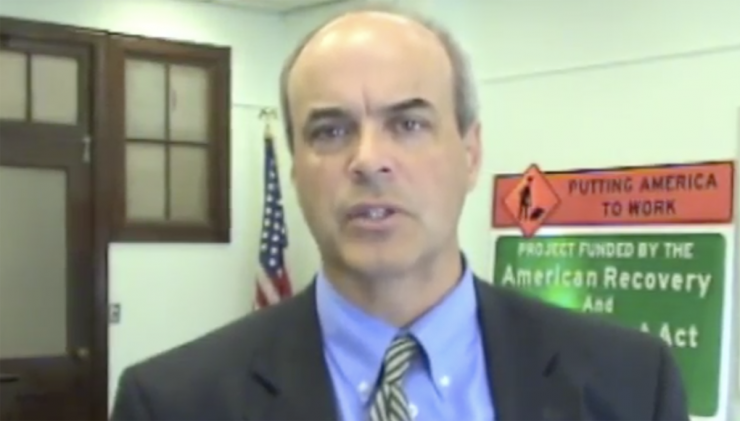 Last week I posted a proposal for an intrastate rail line from Woonsocket to Quonset Point. This is not a new idea and talk about bringing trains back to Woonsocket has been going on for some time.

Earlier this week there was a Congressional Breakfast in Woonsocket attended by more than 100 people, with the topic being transportation in the northern part of the state. The Valley Breeze has a report on the breakfast. Above is a video prepared by the Pawtucket Foundation that was presented at the breakfast.

Those in attendance were in agreement that a commuter rail line connecting northern RI to T.F. Green and points south is not only doable, but vital. The Breeze quotes Sen. Reed as saying that commuter rail, “has to be pursued vigorously.”

So what are the stumbling blocks. One is Amtrak, getting agreements to share the rails, but also agreements on liability. The Conant Street bridge in Pawtucket near the location of that city’s proposed commuter rail station remains closed due to not being able to come to agreement with Amtrak over liability issues in regards to repairing the bridge. The other issue, as always, money. While the rails are there, they will need slight upgrades, also stations will need to be built, rolling stock bought, conductors, engineers, and mechanics hired, all cost money of course. And if you haven’t heard, Rhode Island is lacking in the money department of late. Everyone seems to be in agreement though, that money invested in transit is a good investment for Rhode Island. Our limited land and dense population coupled with the existing infrastructure make transit a key tool to rebuild our economy.

The Rhode Island Public Transit Authority (RIPTA) will waive the roundtrip fare on all service to South County Beaches on Rte. 66 (URI/Galilee) on Sunday, July 29, 2012 in celebration of the Governor’s Bay Day. Rte. 66...