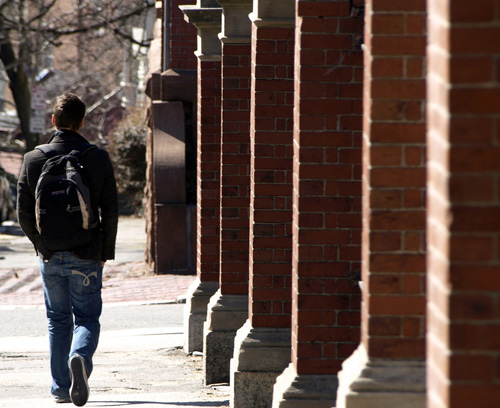 Transportation For America released a report today on pedestrian fatalities in the U.S. ranking the top 52 metro areas over 1 million (Providence ranked 11th best). The results are not pretty:

In the last 15 years, more than 76,000 Americans have been killed while crossing or walking along a street in their community. More than 43,000 Americans – including 3,906 children under 16 – have been killed this decade alone. This is the equivalent of a jumbo jet going down roughly every month, yet it receives nothing like the kind of attention that would surely follow such a disaster.

While our automobile-centric post-war environment is highly dangerous to people on foot or bikes, doctors are telling us that we need to get out of our cars and ambulate more, or our sedentary lifestyle will kill us. Damned if you do, damned if you don’t.

Orlando tops the list because of its high pedestrian fatality rate of 2.9 pedestrian deaths per 100,000 residents, despite a very low proportion of residents walking to work, only 1.3 percent. In other words, the few people who do walk in Orlando face a relatively high risk of being killed by traffic.

The Providence Metropolitan Area (which includes the entire state of Rhode Island and Bristol County, Massachusetts) has 3.3% of it’s population commuting to work on foot and 1.25 pedestrian death per 100,000 residents, bringing us in at 11th safest metropolitan area (in New England, Hartford is 8th and Boston is 2nd). Though we rank well, we should of course strive to be even better (come on, we can’t let Hartford out rank us!). Transportation For America outlines the following ways to move towards safer streets:

Traffic calming and street design. Traffic calming includes a host of engineering techniques used to physically alter road design for the purpose of slowing traffic and improving safety for bicyclists and pedestrians. Beyond simply installing sidewalks, these improvements enhance safety through a focus on intersections with features such as pedestrian refuge medians, better road geometry, and signals that give pedestrians a “head start” when crossing roads. Depending on the type of measure implemented and speed reductions achieved, traffic calming has reduced collisions by 20 to 70 percent.

Complete streets. Where traffic calming seeks to improve safety by reducing traffic speeds, Complete Streets policies ensure that future road projects consistently take into account the needs of all users, of all ages and abilities, particularly pedestrians and bicyclists. Complete Streets designs vary from place to place, but they might feature sidewalks, bicycle paths, comfortable bus stops, median islands, frequent crosswalks and pedestrian signals. Both the American Academy of Pediatrics and the Centers for Disease Control and Prevention recently endorsed the adoption of local and statewide Complete Streets policies as a strategy for improving safety and increasing physical activity among children and adults.

Safe Routes to School programs. Safe Routes to School programs take a comprehensive approach to improving safety around schools for children walking and bicycling. The program funds engineering upgrades like sidewalks and crosswalks, improved traffic enforcement and bicycle and pedestrian safety education. The intent is to address parental concerns about traffic dangers and get more children walking and bicycling to school, which improves their physical fitness and health. From a handful of pilot efforts across the country, Safe Routes to School has grown into a federally-funded program providing more than $600 million over five years for thousands of projects nationwide.

Walkable neighborhoods. Walkable communities are safe and inviting for walking and bicycling, while also featuring compact development and a variety of destinations, such as parks and public space and nearby schools, workplaces and other amenities like restaurants and retail facilities. The tools to increase community livability by improving walkability go beyond investing in pedestrian infrastructure, giving residents and visitors convenient destinations they can walk to.

Now is the time for Congress to act

Congress is currently considering the goals and objectives for a federal transportation bill that will send transportation money to states and cities and guide their spending priorities. The continued high fatality rate shows a clear need for strong leadership and greater resources to end preventable pedestrian deaths and require more accountability from states on how those funds are spent.

Adopt a National Complete Streets Policy. Ensure that all federally funded road projects take into account the needs of all users of the transportation system, including pedestrians, bicyclists, and transit users as well as children, older adults and individuals with disabilities, so they are able to travel safely and conveniently on our streets. Learn more at completestreets.org.

Commit a Fair Share for Safety. With pedestrians comprising 11.8 percent of all traffic fatalities, it is only fair to dedicate at least that proportion of Highway Safety Improvement Program (HSIP) funds to pedestrian projects.
Hold states accountable. Congress must hold states accountable to ensure that transportation funds are spent wisely, by ensuring that:

Related:
Which cities are the safest for pedestrians? Which are dangerous? [Christian Science Monitor]
Taking a walk shouldn’t be a contact sport [The Boston Globe]

WJAR reports: Traffic signals, crosswalks and reducing the speed limit are among the safety improvements that will be made to Route 102 in West Greenwich after two pedestrians were recently killed while crossing the...