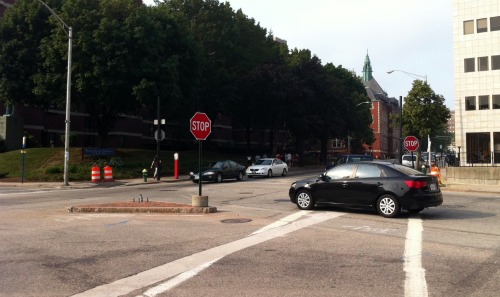 Traffic lights at the intersection of Weybosset, Broad, Empire, and Chestnut Streets on Weybosset Hill have been removed.

As part of the Downtown Circulator Project, the traffic light at the intersection of Weybosset, Broad, Empire, and Chestnut Streets (Weybosset Hill for short) have been removed. The roads will be rebuilt (with Weybosset and Empire both becoming two-way) and new lights will be installed, probably sometime this fall. Curiously, the intersection, which I walk through multiple times a day, has become much better without the lights. 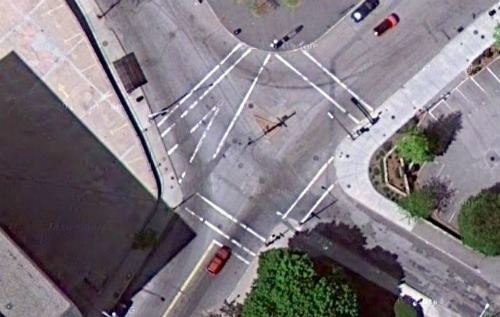 Weybosset Hill intersection from the air, image from Google Maps

Due to several factors; the intersection being a two-way meeting three one-ways, the overly wide turning radius on the corners, Rhode Islanders liberal use of right and left on red (stopping first being optional), and more, this intersection has been a nightmare for pedestrians. There are no walk lights and the geometry means there is never a point in the light cycle where traffic does not have a green light allowing them to move through.

As a pedestrian, you basically had to take a lane and edge your way into traffic until someone stopped in order to cross.

Now with the lights gone and being replaced by stop signs, the intersection has become civilized with traffic (auto, pedestrian, and bike) taking turns to get through the intersection, with no observable impact on the flow of traffic, except to make it safer and more convenient for pedestrians.

Where before, drivers focused on the light, edging their way into the intersection until it turned green, or plowing through a right on red with near reckless abandon, motorists now have to be aware of their surroundings. They stop at the stop sign and look, then proceed when they see it is clear. Where before driver behavior was controlled by the directions given to motorists by the light, now their surroundings are impacting how and when drivers proceed.

Motorists are making eye contact with each other and pedestrians and everyone is deciding together the best way to navigate the intersection. And, all signs show that this arrangement works. Pedestrians who used to pile on the curb and cower, until they could dart through a break in traffic are now flowing uninterrupted across the street. Cars on Broad which would before back up a red light, when Empire often had no traffic for which they needed to wait, can now move smoothly after a short stop.

When this intersection rebuild is done, the geometry will be different, Empire and Weybosset will both be two-way, so perhaps the removal of the lights won’t work as well then, but we should certainly look around the city and see where removing lights can actually improve traffic flow and safety (not to mention the cost savings of not having to maintain a traffic light).

Some progress photos from the Weybosset Street/PPAC Square project.