Have you been sitting in traffic on the Braga Bridge in the last decade and looked north to see a new bridge being built? Ever wonder when the hell that thing was going to bedone. Today the bridge, named the Veterans Memorial Bridge, had a soft opening today.

The bridge will eventually connect Route 79 in Fall River to Somerset. The bridge carries Route 6 and will replace the aging Brightman Street drawbridge, which was built in 1906. The new bridge is also a drawbrige, but with a higher span, will require less openings allowing road and water traffic to move more freely.

The Fall River Herald has more on the opening:

The $292 million bridge, which has taken more than a decade to build, was dedicated on Sunday, along with the bike path, named after Army Private Michael E. Bouthot of Fall River, who was killed in Iraq in 2006. 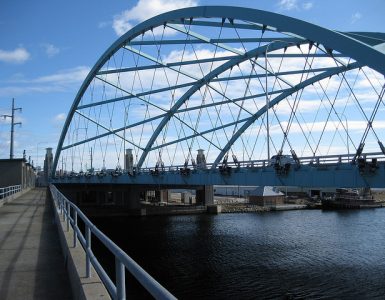