This post was submitted by a Greater City: Providence reader.

I enjoy the discussions of big plans and projects like train stations and streetcars, but sometimes I despair of anything ever coming about in a city that can not accomplish the simplest, tiniest, glaringly, obviously necessary public works.

These pictures were not taken on isolated, dead end residential streets. They are some of the busiest pedestrian routes on the East Side.

Leaving Miriam Hospital and looking to catch a #99 bus on North Main?

This view is down 5th street to North Main. This is the main vehicular route to the hospital including ambulances. I guess people should be thankful for state of the art painted crosswalks and unwarranted 4-way stop after having to walk in the street.

Those who work at Miriam and walk to their car at the old auditorium can study glacial geology on Highland Avenue at 4th street.

Bring your all terrain wheelchair if you want to enjoy this righteous ADA compliant curb at the corner of 3rd and Highland.

It may come as a surprise to windshield perspective types, but people actually do walk to the Bus Terminal at the end of Cemetery Street. While staying with us a while back, my elderly mother took a day trip to Boston by bus. I offered to drive her to the terminal but she said “Don’t be ridiculous, I know where it is and it is only a few blocks.” This is Frost street about halfway from North Main to the Bus Terminal. She fell here.

I urged her to sue somebody and make a stink, but she was not badly hurt and soldiered on.

Even where there is a sidewalk you still may still have to dodge the traffic speeding around the bend.

You can see little kids on their way to and from the playing fields walking in the street here too.

These dangerous substandard conditions have been in place since the neighborhood was developed from farmland. In recent years, millions have been spent to install neckdowns along Hope Street and Summit Avenue, on ADA compliant curb cuts, and on sidewalk replacements. That’s all good, but who is minding the priorities as they might affect the people who actually walk around?

At a neighborhood meeting a few years back, Councilman Jackson was strutting about how he had brought in the funding for sidewalk replacements then underway. I pointed out a site where a sidewalk in reasonably fair condition was replaced, right next to a broken, crumbling one that was left untouched and asked why. He said that a property owner must apply to his office for a replacement and wait for years. I asked would he not agree that a greater good would be served if sidewalks were built where they are most needed or even entirely absent instead of spending money to replace serviceable sidewalks? He rolled his eyes and explained that by ancient statute, the initial construction of a sidewalk is up to the property owner. After that, the city can decide to rebuild it, but the city has no provision to construct sidewalks where there are none. I tried to point out that an ancient statute that serves the public so poorly is something a councilman could do something about but he hurried away. I guess the status quo is working for him.

Enormous spending on highway projects is beyond question. Lots of other projects of varying worth get proposed and built. Yet little old ladies are stumbling over rocks where a mere sidewalk should have been built 90 years ago and nothing can be done.

You just wanna walk? No infrastructure for you! 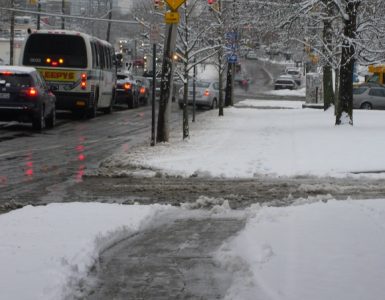 A reader submits photos and commentary on common snow removal issues along North Main. Just a little extra effort would save hundreds of people from huge inconvenience and safety concerns.

Irene photos from our readers.

Great reader photos and videos of the Route 195 demolition.