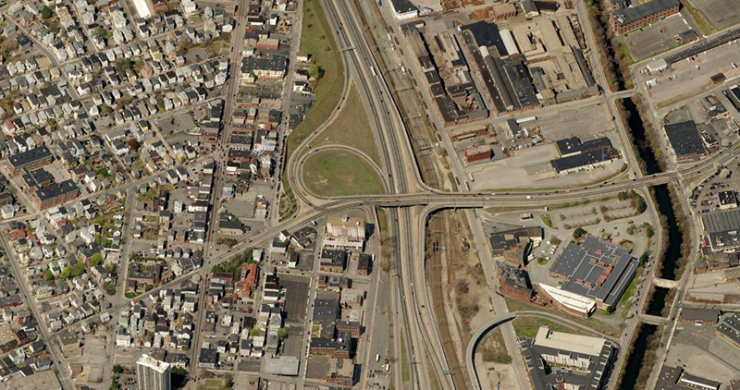 Dean Street interchange with Routes 6/10 center, Federal Hill to the left, Smith Hill to the right.

Providence has too many highways, and I wouldn’t be an opponent of removing some entirely. But if we’re going to have a highway system snake through the city, let’s at least make it useful. The Dean Street exit ramps should be removed, in my opinion, and a multi-modal boulevard should replace the highway-let that the street currently is.

As a bike commuter, I hadn’t really experienced rush hour traffic on Routes 10 & 6 until I had the recent occasion to sit motionless on a school bus with the kids I was transporting from Nathan Bishop Middle School to Del Sesto M.S., for a basketball game. It seemed an oddly short route to have to be taking a highway, I thought, and seeing how traffic was, I thought I’d probably could have gotten the kids faster there on bikes moving down local streets.

The Dean Street exit can’t possibly be doing any motorists any favors. It’s only a stone’s throw from several other exits in Smith Hill, Federal Hill, and Downcity.

When we design a highway, it’s supposed to be fast. With so many exits, we’re encouraging people to use the highway for local travel, and that’s probably a big part of why speeds at rush hour are so slow. If you’re only going from Downcity to Federal Hill, or from Smith Hill to Federal Hill, you don’t need a highway to get you there. The nearest I could possibly imagine someone needing to have an exit on the highway from Downcity would be somewhere near the edge of town along the Cranston border. Having all these tiny little exits scattered everywhere makes the highway useless for it’s stated purpose.

If that was the only problem to having exit ramps on Dean Street, maybe it wouldn’t be a big deal. But the ramps are huge, and eat up prime real estate in Federal Hill that could be developed. With a generous tree sound buffer planted between it and the highway, the remaining land from the former exit could become a new section of historic Federal Hill, designed to be walkable and small business-friendly.

Once, on a whim, my partner and I took Exchange Street from where it intersects with Sabin, to see whether it was a bikeable route. It was beautiful until we got to Dean Street, and then it felt almost like there was nowhere to go. Exchange Street could be carried through this new neighborhood as a bike-friendly route, and bring Federal Hill a tourist-friendly connection to the convention center area.

Providence doesn’t have all that many options for traveling between Smith Hill and Federal Hill, so Dean Street is also a prime target for change because of how important it could be to connect multimodal transportation between the two as yet alienated neighborhoods. Dean Street is wide enough that it could maintain a car connection north-south over the highway, while bus-only lanes and protected bike lanes could be put into a new Dean Street bridge to speed traffic for non-car users.