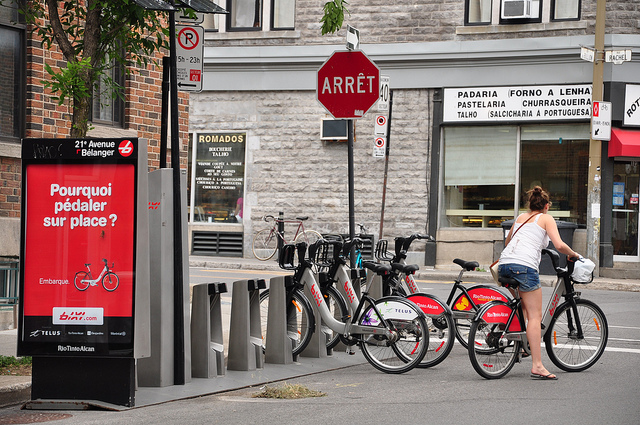 A member of Montreal’s city executive committee says he cannot guarantee the municipal administration will put more money into Bixi if it requires financial assistance.

The bike-sharing program has struggled to make ends meet since it first hit Montreal streets in 2008.

Jean-François Lisée, the provincial minister responsible for Montreal, said Bixi was a valuable service and deserved to be helped out. He said the Quebec government is working on a $5-million bridge loan for the program.

See also: The Atlantic Cities: In Paris, Thefts and Vandalism Could Force Bike-Share to Shrink

The Walking Bostonian: Car-free housing in Boston is natural

I feel strange explaining the concept of a market to someone as old as Tom Keane. The idea that residents could rent or purchase a parking space in a nearby garage should not be that difficult to grasp, and it’s not much different from the many other transactions which take place between residents and local businesses. For example, most apartment buildings are not constructed with grocery store requirements. However, most people seem to understand that when a resident wants a bottle of milk, they can walk down to a nearby store and buy one. We do not need to build “minimum grocery store requirements” into the zoning code because those products are handled perfectly well by normally operating markets. And parking spaces are no different. They are just one type of land use, among many, that can be purchased or leased on the real estate market.

The Boston Globe: Condos without parking proposed near TD Garden

A luxury condominium building next to TD Garden in Boston would not include any parking spaces, setting up the first test of whether a city notorious for traffic-clogged streets is ready to embrace housing developments that discourage automobile use.

I’m a relative newcomer to Rhode Island, but you don’t to be here long to hear about the infamous “Greenhouse Compact,” a state economic development strategy developed at the end of the Volcker recession in 1983 and voted down by the public in 1984. It is certainly one of the most remarkable economic development analyses ever performed. I have not seen a full copy, but the internet tells me it exists in at least two volumes with a length of at least 976 pages. There was a 47-page executive summary – not much shorter than many full reports these days – that I did manage to get ahold of and read, however. If the full report is as robust as that suggests, then I’ve never seen anything that appears to be so thorough and in-depth.

Getting rid of the federal gas tax in lieu of a wholesale oil tax increase would help close an approximately $20 billion shortfall in transportation spending Congress is looking to solve, Sen. Barbara Boxer (D-Calif.) said.

“There are many ideas out there, and the one that I’m leaning toward myself, although this is going to be a decision of the [Senate] Finance Committee … is to do away with the per-gallon fee at the pump and replace it with this sales fee as they’ve done in Virginia and Maryland,” Boxer said during a hearing of the Senate Environment and Public Works Committee.

The Atlantic Cities: What the Rise of Technology Has to Do With the Decline of Driving

Teleconferencing has made telework more common. E-commerce has reduced the need to drive to the mall. Real-time arrival apps have made public transit more predictable. Solar-powered stations have helped bike-share expand. WiFi and smart phones have made it possible to get work done on a moving bus, raising the mental cost of driving alone. And social media, for some people, has reduced the need to travel across town to see a friend you might more easily connect with on Facebook. 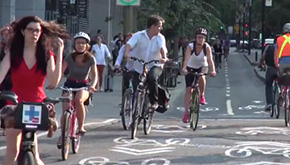 Streetfilms: A Montreal Intersection Morphs Into a Wonderful Neighborhood Space

On a Bixi bike excursion to get some ice cream in Montreal, my wife and I stumbled upon the intersection of Fairmount Avenue and Rue Clark, recently upgraded with colorful new street furniture, traffic calming...