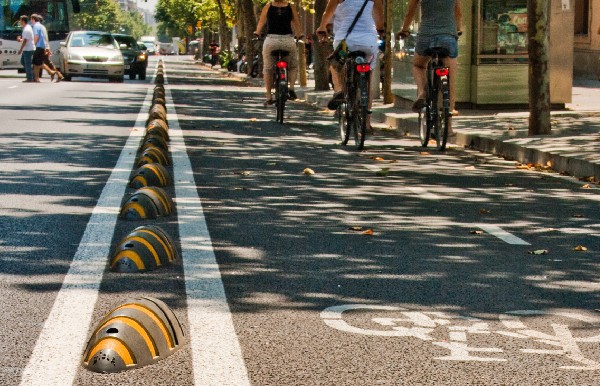 Fast Company: These Recycled Plastic Dividers Can Create A Bike Lane In A Second

Painted bike lanes are safer for cyclists than riding in the middle of the road, but bike lanes that are separated with a curb are even better. For example, one study found that cyclists in separated lanes had 80% fewer accidents than those in regular bike lanes. But it’s often tricky to convince city governments to take the extra, more concrete step of separation. One product from a U.K. design firm aims to help.

The “Armadillo” is a low-slung recycled plastic bump that can be installed along the edge of a bike lane. Set at an angle, the bumps allow enough space for bikes to ride back out into the street if they need to, something that isn’t as easy with a full concrete curb. But it still keeps cars out.

The system, called Pedestrian Split Cycle Offset Optimisation Technique (SCOOT) uses cameras to figure out how many people are waiting to cross the street and adjusts traffic signals accordingly. So if there is a large crowd waiting, for example, the signal to walk will last longer, giving the crowd more time to cross the street.

I honestly don’t have an answer to the cultural issues. No policy is going to make the Spike Lees of the world less angry about past slights, or newcomers who seek a quiet home more tolerant of noise. But maybe, just maybe, there are some reasonable approaches to protect lower-income, longtime residents against unreasonable rent or tax hikes caused by rising property values in once-distressed neighborhoods. That would be a start.

Philadelphia, for example, has adopted a program that allows homeowners who have lived in homes for ten years or more and whose household income is less than about $110,000 annually to cap and freeze their assessments for ten years if the assessments increased by 300 percent or more as part of the city’s new property tax formula. A 300 percent increase sounds like a high bar, but it is not uncommon in Philadelphia, suggests an article written by Timothy Williams for the New York Times.

I advise cities and towns not to wait for a visionary mayor on a white horse, but to start building grassroots and business support for smart growth today. If you do happen to elect a heroic leader, he or she will have a much easier time with this support in place. Absent a mayor like Heller or Sanders, a movement of citizens can still make vast progress. In other words, we have to build our “champions” from the ground up.

The Walking Bostonian: The perversity of the Beacon Hill historic district

Beacon Hill (the neighborhood, not the state house) is in the news this past week for the Beacon Hill Architectural Commission’s (BHAC) refusal to comply with the Americans with Disabilities Act. Apparently, accessible pavers and handicap ramps, they claim, would mar the historic character of the neighborhood. Adam has some fine snark in response:

Yes, they would seriously detract from the hundreds of colonial automobiles parked on colonial asphalt underneath all those colonial Resident Parking signs when their drivers (garbed in breeches, no doubt) aren’t busy stopping for colonial traffic signals and colonial stop signs.

This is what drives me insane about ‘historic districts,’ the picking and choosing of what needs to be preserved, what can be added, and what is forbidden. If Paul Revere or Roger Williams had vinyl windows, they would have used them; but at the same time, Paul Revere and Rogers Williams did not pave half their yard to park their SUV. Yet which is allowed and which is not?

I attended an hour brainstorming session on the Rhode Island skills gap a while back and not once did anyone suggest anything that crossed the state boundary. One person mentioned these technical high schools in Boston that produce grads with exactly the skills the market is needing. His idea was that Rhode Island needed to create these types of institutions. Not a bad idea, but I was struck that nobody thought about sending these Rhode Island employers who can’t find workers on the one hour drive to Boston to go hire some of those grads directly out of Boston’s high schools. Problem solved. And maybe while bringing some young, fresh blood into the state to boot.

Rhode Island is not actually an island.

Streetfilms shows us floating parking and separated bike lanes. A concept we could put in place in Providence along Broadway.