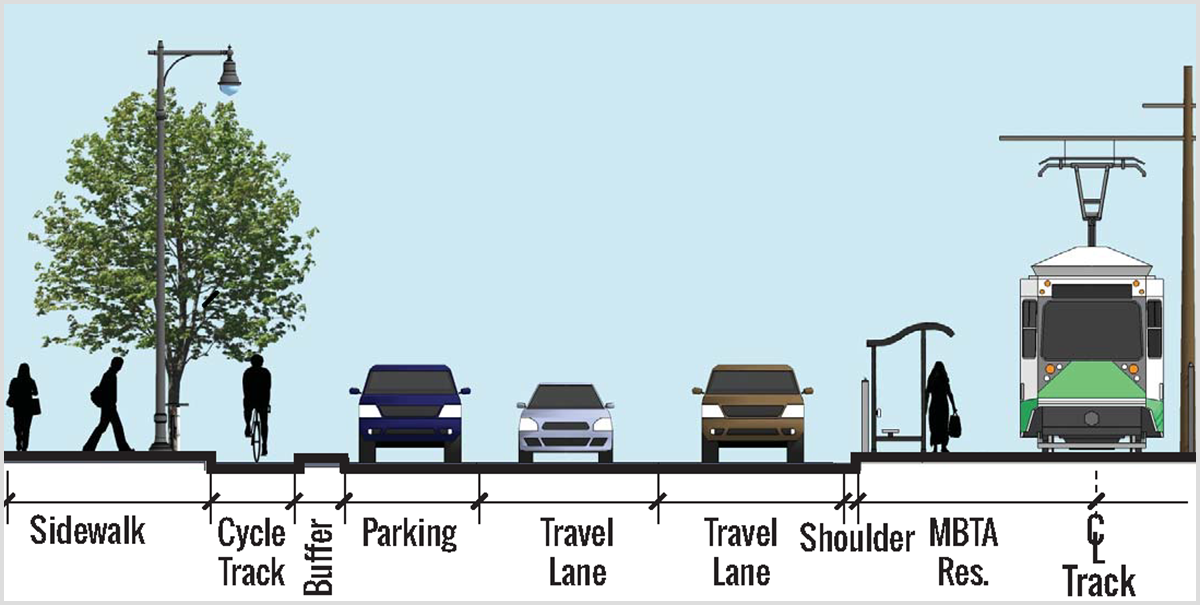 The city of Boston will install protected bike lanes on a stretch of Commonwealth Avenue, a victory for biking advocates who have pushed for the city to make it safer to cycle down the bustling thoroughfare.

City officials announced on Tuesday their plans to replace existing bike lanes with protected bike lanes — known as cycle tracks — from the Boston University Bridge to Packard’s Corner. The lanes will be about two-thirds of a mile and use parked cars as a barrier between cyclists and vehicle traffic, a move meant to cut down on accidents that have become common along the heavily used road.

Providence is working on plans for the first protected bike lanes in the state along Fountain Street downtown.

The New Journal: Paint the Streets

On the morning of Sunday, May 1, 2011, residents of the Audubon district awoke to find a bold new crosswalk at the intersection of Whitney Avenue and Audubon Street. Spray-painted and slightly crooked, the rogue act made headlines around town. Opinions differed—officials said the sight lines weren’t clear enough for a crosswalk, business owners liked that it made it easier for people to get to their stores, and some just thought it looked a little funny. Useful or not, the crosswalk was illegal and officials had the paint removed two days later. The impromptu markings made a point, however: the intersection was dangerous. The city needed to rethink its streets.

Next City: Can the Bid for Walkability Make More Cities Take Responsibility for Sidewalks?

Are sidewalks public or private property? It might sound like a philosophical question, but for the sake of maintenance, it’s one that officials have to ask. Because decades-old codes often task property owners with upkeep, sidewalk repair in many cities has become a piecemeal effort, enforced only by litigation and resulting in miles of cracked pavement. As street-side infrastructure ages and walkability becomes an increasing marker of good municipal governance, officials from Los Angeles to Memphis are trying to figure out a better system.

New York City Mayor Bill de Blasio joined mayors from across the U.S. on Monday to demand increased federal transportation funding, promising a campaign to get Washington to spend more on bridges, roads and improvements to mass-transit systems.

“If this country doesn’t invest in infrastructure, doesn’t invest in transportation, we will literally fall behind,” Mr. de Blasio said Monday afternoon during a news conference at Boston’s historic Faneuil Hall.

The Common Council today passed legislation to enforce $150 fines against commercial plow operators who deposit snow on sidewalks or other public spaces, and to establish a $100 fine for property owners who do the same thing.

“I think it sends a message to people that we shouldn’t be doing things that don’t allow people to walk on our sidewalks,” [3rd District Councilor Bob] Dougherty said.

Kinzie Street: The First of Many Protected Bike Lanes for Chicago