Making room for bikes on the new Union Avenue bridge

They asked RIDOT if there was any accomodation for cyclists in the new bridge design and were told:

The new Union Ave bridge will have the same design configuration as the old Union Ave bridge. There will be a 2 foot median, 2- 11 foot travel lanes, a one foot shoulder, and a 6 foot sidewalk, in each direction (Eastbound & Westbound). There is no special accomodation for bicycles on this bridge. Bicyclists will have to follow the standard traffic laws.

When asked if the design could be changed to allow for bike lanes, a RIDOT spokesperson said it was too late and would be too expensive to change the design now.

It would likely be prohibitively expensive, and slow the work schedule, to redesign the bridge at this point to accomodate full bike lanes. The actual structure would need to be made wider. Of course it should have been designed with bikes in mind from the get go, but as described, I would think it is possible to accomodate bikes somehow.

First let me just say this about the design. 46 feet for automobiles and 12 feet for pedestrians, really? RIDOT, get with it, this is a city, people walk here.

OK, I would start with getting rid of the median. Medians separate traffic and often cause cars to move faster, since there is a barrier between them. Having only a double yellow line puts opposing traffic closer together and drivers slow down.

So with that there’s now 2 feet to play with. My understanding is that Rhode Island law allows bikes on sidewalks (or does not expressly prohibit bikes on sidewalks). As a pedestrian, I’m not really on board with that, but if it makes bikers safer at this crossing, I’m willing to go with it. Simply adding that 2 feet from the median makes each sidewalk 7 feet wide now, giving slightly more room for bikes and pedestrians to coexist on them.

But I wouldn’t stop there, at 11′, the travel lanes for the cars are on the wide side, interstate standard is 12′ and Union Avenue is not an interstate. The lanes could be dropped to 10′ or 9.5′. If the lane widths dropped to 10 feet, that would give us 4 more feet to play with, allowing for 10 foot sidewalks.

Alternately, the sidewalks could be kept at the original 6 feet, the center lanes used for left turns, could be 9.5 feet, then the outside lanes could be 13.5 feet wide, with Sharrows painted on them for bike accomodation.

Or, there doesn’t need to be 4 traffic lanes at all, on either end of the bridge, Union Avenue is only 2 lanes wide. Make three 10′ lanes with the center lane divided into left turn lanes for either direction at either end. That leaves us with 30′ for cars, 12′ for sidewalks, and 16′ for bike lanes. Since bike lanes should be 4-5′ wide, we’d have planety of room for the bike lanes to be protected from the traffic lanes.

Yes, at this point, any of these changes would cost RIDOT some money (if only to pay an engineer to draw them up), would likely have some degree of impact on the schedule, and would be subject to review of the contractor’s quote (different configurations use different amounts of material, etc.) but it would not be impossible even at this late date to reconfigure what actually is placed on the 58′ road deck. In fact, aside from removing the median (which should be a cost savings I would imagine) most of these options are simply a matter of paint on the roadway.

And seeing as it is simply a matter of paint on the roadways, this is something that is possible on other bridges in the area. Atwells Avenue comes to mind (both the Route 95 and Route 10 bridges).

I’ve said it before, I think RIDOT is starting to move in a good direction as far as livable streets are concenred under the direction of Micheal Lewis, but it is taking too long to make the change in internal culture they need to make, they need to step it up! We can’t keep building bad bridges and thinking, “well, the next one we’ll build right.” 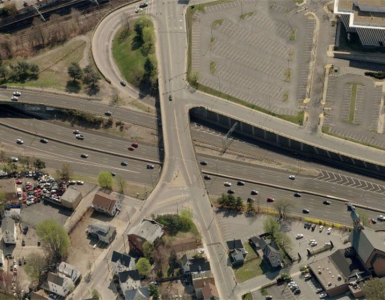